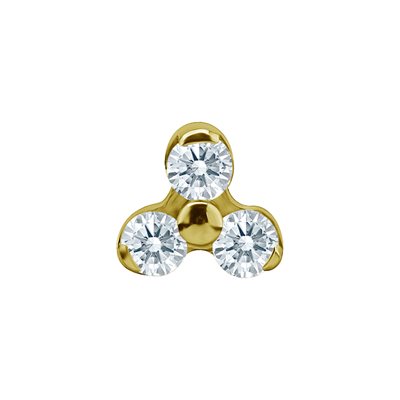 Press and move to zoom.
Mouse over image to zoom.
Click to enlarge

Be the first to write a review for this product!

Titanium is ideal for both initial body piercings and healed piercings as it is compliant with the EU Nickel Directive introduced in Europe in 2001. Because of its virtually 'Nickel Free' content Titanium has become one of the preferred materials used in piercing jewelry within the borders of the European Union.

Grade Ti6AL-4V, ASTM F136 is the specification for the alloy to be used for surgical implants. The color of titanium is a silvery metallic white. An anodization process allows the metal to have a variety of pleasant colors. The color of anodized titanium parts is determined by the tension applied during polishing. Titanium is only half the weight of steel and twice as strong. Titanium can be sterilized in an autoclave.

The jewelry is coated in a heated chamber under high vacuum. Electric voltage applied will form a plasma in the chamber andthe introduction of various gases produces an ion bombardment. This bombardment atomizes the cathode material (24k real Gold) into tiny substances which are deposited on the jewelry. The result is a hardened layer, which is biocompatible. It can be autoclaved.

Cubic Zirconia is currently the most popular substitute to a diamond because to the untrained eye they look identical. Cubic Zirconia or CZ as it is referred to is made from zirconium dioxide a different material than diamonds, which although a different chemical composition comes closer than any other gem to matching the characteristics of a diamond.

Natural CZ was first discovered in 1899 but it wasn’t until the late 70’s that man-made CZ first came into production for use in jewelry.

CZ on first impression looks just like a diamond, but under close inspection there are differences, it has a gravity of between 5.6 and 6.0 which means it’s 1.6 times the weight of a diamond. It has a hardness of 8 on the Mohs scale, a refraction index of 2.176 and a dispersive power of 0.060, which means that it’s not as hard as a diamond; it’s slightly less sparkly but displays more prismatic fire which means more colour sparkles within the gem.

Another point to note is that natural diamonds display impurities which CZ doesn’t. It’s also clear in colour which most diamonds aren’t, but they can be coloured by adding metal oxides in the production process. Unlike diamonds, CZ are good thermal insulators which mean they become warm, but can’t withstand the same kind of heat a diamond can, which is one test that is used to distinguish diamonds from CZ. Caring for CZ is important because they are more brittle than diamonds and susceptible to wear and tear such as chipping and scratches over time.

Powered by k-eCommerce for Acomba