Although many different types of tattoo machines are available on the market these days, most artists find themselves choosing between two models, picking either a dual coil machine or a rotary machine. Yes, they both achieve the same purpose, but the way they drive their respective needles in and out of a client’s skin, as well as their versatility, is what sets them apart from one another.

In a nutshell, dual coil machines are plugged into a power supply and rely on electromagnetic current passing through two coils to function. Once said current is flowing, it releases the armature bar holding the needle(s) down into the skin. The electromagnetic field is then broken and the armature bar is lifted back up by a spring, thus returning to its original position. This cycle then repeats again and again, allowing the artist to tattoo their client, as the needle rises and falls in a hammer-like motion.

Meanwhile, rotary machines rely on a motor that rotates clockwise to drive the needle bar up and down in a more smooth, even manner. That being said, dual coil machines seem to be the more popular (and affordable) choice among modern-day artists. This is changing, however, as tattooers are starting to embrace the added perks that come along with rotary machines. But more on those later! First, let’s take a look back at the history of the tattoo machine.

The Evolution Of Rotary Machines It was 1891 when tattooer Samuel O’Reilly invented and patented the first-ever electric tattoo machine, which was similar in design to today’s rotary machines. Taking Thomas Edison’s 1876 invention, known as the Autographic Printing Pen, and modifying it, he arrived at history’s very first tattoo machine.

At the time, the Autographic Printing Pen was used by businesses as a time-saving tool, which allowed them to create copies of documents quickly and efficiently. Basically, the pen had a high-speed electric motor and a thick steel needle that was used to make holes in a paper, which would then be used as a stencil. Ink would be rolled over the perforated paper and the design would appear on a blank page that was placed underneath it. Simple but totally brilliant, right?

Unfortunately, the pen turned out to be way too heavy for extended use, so Edison took out the battery and presented the world with the revamped Perforating Pen in 1878. This updated version worked like a sewing machine and was powered by pressing a pedal. Just a few weeks later came the Edison Pneumatic Stencil Pen, which, as Britishink (www.britishinkdc.com/tattoo-machine-history) describes, used “air pressure, gas or a liquid that could turn a fan system and drive the needle bar, making the machine lighter and easier to use than the previous incarnations.”

But enough about Edison — let’s bring the focus back to Samuel O’Reilly. The New York-based tattooer, who emigrated to the United States from his native Ireland in 1875, was reportedly walking by an office supply shop in NYC’s Bowery district when something caught his eye: the Edison Pen displayed in their window. After walking inside and asking for a demonstration to see how the pen worked first-hand, tattoo history was forever changed.

Taking its design as inspiration, O’Reilly added two needles, plus a compartment for ink, and tweaked its straight barrel to include two right angle bends, so the motor could move more efficiently. And that’s how America’s first rotary tattoo machine was born. Obviously realizing what a special invention he had just created, he patented his Electric Tattooing Machine on December 8, 1891 and began using it at his shop, located at No. 11 Chatham Square, with great success and popularity.

This is the part where things get even more interesting. Just 20 days after O’Reilly filed his patent, Londoner Tom Riley patented an electromagnetic coil machine in England. Riley’s single coil machine, which played off of a doorbell-like system placed inside a metal box, was the basis for today’s coil machines.

Fellow Londoner Alfred Charles South patented a dual coil version soon after, but there was one major downside to their creations. Unfortunately, they proved to be so heavy that artists actually had to hang their coil machines from the ceiling using a spring to reduce the weight they had to hold in their hands. Not exactly the most convenient thing in the world. 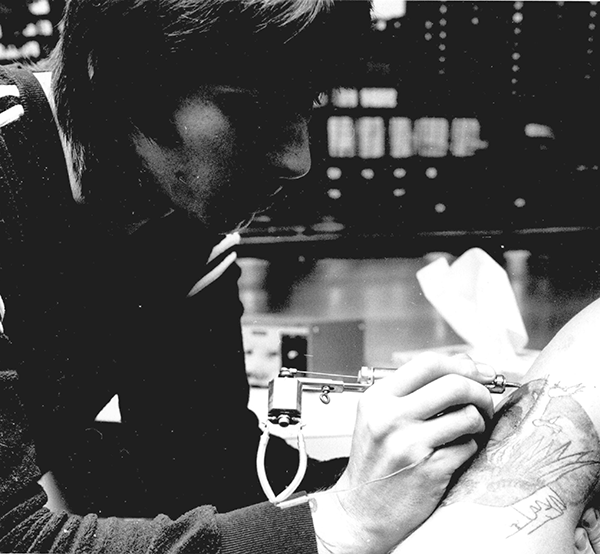 Back in the U.S., the first twin coil machine to appear in America came courtesy of New York’s Charles Wagner (who worked closely with original tattoo machine inventor Samuel O’Reilly) in 1904. Inspired yet again by Edison, Wagner placed the machine’s coils side by side and used a cross-shaped armature bar for his design. This small detail made it difficult to mass produce Wagner’s particular type of machine, but despite that, it sold extremely well.

The tattoo machines most artists use today aren’t all that different from Samuel O’Reilly’s original 1891 invention, although the design and materials have been slowly perfected and tweaked over time.

The last man to make major changes to the tattoo machine as we know it was tattooer and businessman Percy Waters. In 1929, after establishing one of the biggest tattoo supply companies in the world in his hometown of Detroit, Michigan, Waters took O’Reilly’s design and added two electromagnetic coils to it, a spark shield and an on/off switch.

He also created 14 different frame styles, all of which are still used today. This allowed machines to become more customizable and versatile than ever before. The only negative was that they were not designed to be taken apart or cleaned. Not all innovations have been successes, however. Canadian artist Carol Nightingale, for one, is believed to have only sold a couple of the groundbreaking 1979 Electrical Marking Device in which every single aspect was adjustable. Unfortunately, the design turned out to be way too complicated and prone to problems.

Bringing the focus back to rotary machines, one big question remains: What really sets them apart from double coil machines, and from the rest of the pack? Rotary machines actually come with several perks when compared to the double coil model, all of which are helping their continued rise in popularity. These perks include:

Thanks to their lack of electromagnetic coils, rotary machines are noticeably lighter than their double coil counterparts. This translates into less hand cramps and the ability to tattoo comfortably for longer periods of time. Something any artist can greatly appreciate.

Rotary machines also create less noise than dual coil machines because there’s no electromagnetic switching happening between coils. This means that the constant buzzing that’s oftentimes associated with tattoo shops is greatly quieted down — a perk for artists, but also one that’s greatly appreciated by clients.

Unlike dual coil machines, rotary models can act as both liners and shaders, eliminating the need to set up multiple machines and switch between them. No matter the intricacy of the design at hand, one single rotary machine can indeed complete it in full, as long as the artist switches needle bars accordingly.

Rotary machines are not meant to be taken apart and tuned between customers, which is both a pro and a con. The upside is that they require way less maintenance and setup time, but on the other hand, that means they’re less customizable overall.

The Most Common Types Of Rotary Machines

As rotary machines continue to grow in popularity, more and more models are becoming available. There are four main types, however — Direct Drive, Armature Bar Guided, Linear Action and Swashdrive — as well as countless hybrid versions. The most popular hybrid is the Dragonfly. Let’s take a closer look at each one of these five popular models:

This extremely quiet machine is unique because its needle is directly attached to the cam wheel, which is then placed directly on the motor shaft. As the wheel turns in a circular motion, it smoothly and efficiently moves the needle up and down. The downside? The needle can be tricky to stabilize and adjusting its depth is not really possible.

In this model, the needle bar is attached to the armature bar, which is attached to a small cam wheel that causes it to move up and down. The armature bar is held in place by the machine’s frame, resulting in very precise, accurate movement of the needle bar. Although it’s one of the loudest rotary machines out there, it does come with numerous perks, including great versatility. The length of the cam arm can easily be adjusted: Longer for a shading and shorter for a lining.

More complex than the previous two models, the Linear Action machine has a needle bar attached to a slider mechanism held in place by a channel, which is attached to the shaft of the motor. The motor is then hidden inside a frame. Smooth, stable and quiet, this type of machine sometimes includes an adjustment mechanism on the slider for increased versatility. Unfortunately, it’s difficult to take apart and fix and is prone to overheating due to the friction caused between the slider and its frame.

Super quiet and super smooth, the Swashdrive relies on a swash plate to transform the motor’s circular motion into the up/down movement required to drive the needle(s) into the skin. Because this model requires a higher voltage than the others to operate, it is imperative that the swash plate and motor are always well oiled and expertly assembled.

The most popular hybrid, the Dragonfly rotary machine only weighs 80 grams and is surprisingly silent and ergonomic. It also has an adjustable hitting force and stroke length and is compatible with all standard grips, tubes and needles. What’s more, one of the latest incarnations, the Dragonfly X2 (www.inkmachines.com/node/2), allows artists to easily swap between standard and cartridge needles by removing the stay up spring. The spring is accessed through a lid in the frame and only needs to be taken out when using cartridge needles, then replaced for standard ones. Simple! These machines are available on our website here. 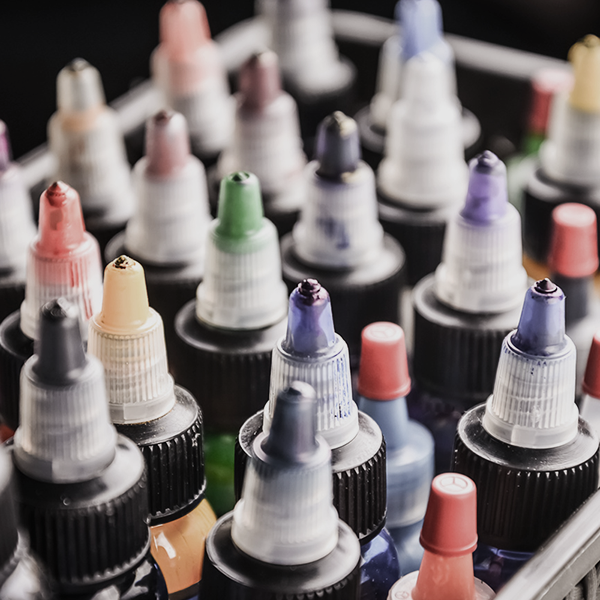 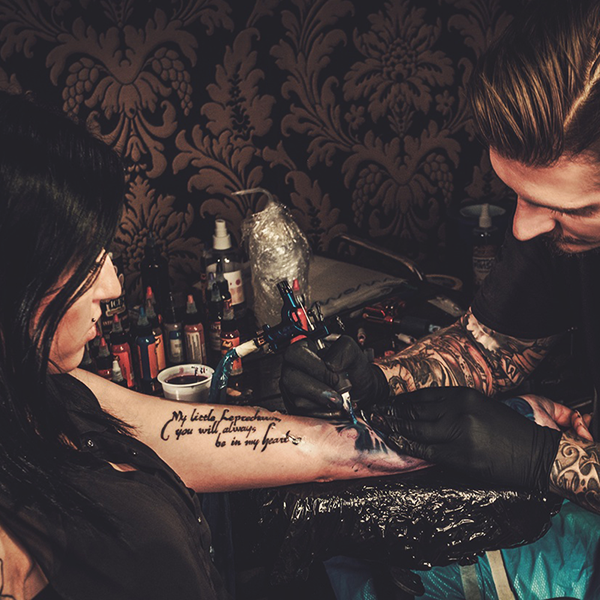 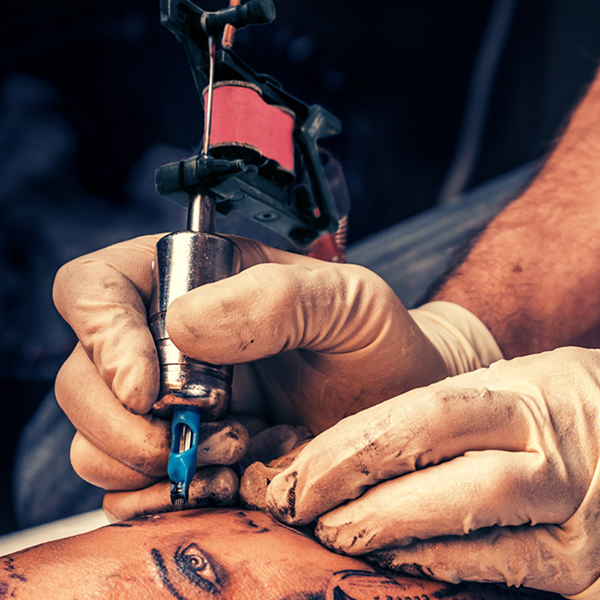