Trinity: Tell us about how you got started as a tattoo artist and what motivated you to get into the industry.

Michael: I formerly worked as an artistic director and during my long years of studies I touched many facets of art because everything relating to art really fascinates me!! I had the chance to meet many well-known individuals that at the time were starting as tattoo apprentices. It was then that I wanted to try this art form. It didn’t occur to me then that I could adapt my tattooing to my art style and thought that it was up to me to adapt to the tattoos. In those years, there were a handful of artists who did black and grey realism, a lot of old school/new school and traditional, and some tribal and Japanese (from what I saw). I really wanted to try it! My type of illustration really didn’t fit and I was struggling to find my vibe so I quickly decided to put tattooing behind me. It was about 4 years ago that I decide to give it another try after seeing the work of many French artists such as Yann Black, Léa Nahon, Xoil Loïc and many others! I loved my job I had but everything around it was wearing me down. I needed a change, some positivity and some new challenges! It was then that tattooing presented itself to me with its unlimited horizon and immense possibilities! 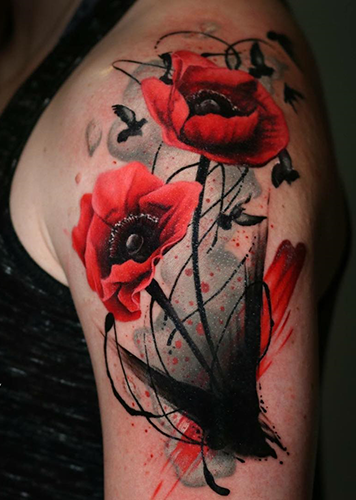 T: Do you have a preference of what kind of tattoos you like to do and why? Describe your style.

M: I sure do! Having lived my life in the graphic arts, it has without a doubt had a huge impact on my work. I truly appreciate all styles of tattoos but it’s really a mix of realism and graphic elements that interest me most! I like realism because it’s a huge challenge to understand an image and to reproduce it. I personally try to simplify an image as much as I can in order to get a result that’s more meaningful and impactful! The graphic elements then come in and add details, help with the style or frame the piece. A lot of people associate my style with “trash polka” which is a style in its self and created by Volka and Simone from Buena Vista. For sure they have greatly inspired me but I try to create my own style with my own signature.

T: What was your first tattoo? What was that experience like?

M: My god! If we go to back to my very first tattoo while I was trying the first time, we go back a while ago! I had this small kit from china with materials that weren’t very good quality. My sister-in-law really wanted small faces on the bottom of her toes so she can put on little shows for my big brother (special . . . I know!). Anyways I did the tattoos but they never even held up. Moral of the story, I think it’s better to follow a standard path, build your kit properly and adjust it with the proper know-how before throwing yourself into stupid tattoos. 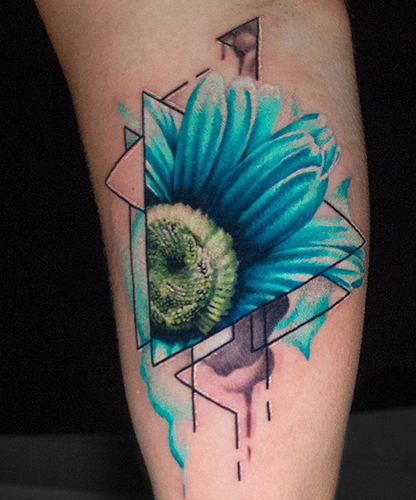 T: What did your family and friends think about you getting into tattooing?

M: I got lucky that my family have always encouraged me in whatever path I chose no matter what it was! The shock was still present when I announced that I was leaving behind the job I had studied 6 years for to start a new career from zero. They digested the news quickly and supported and encouraged me in my journey. Some friends even told me that it was about time that I did it! 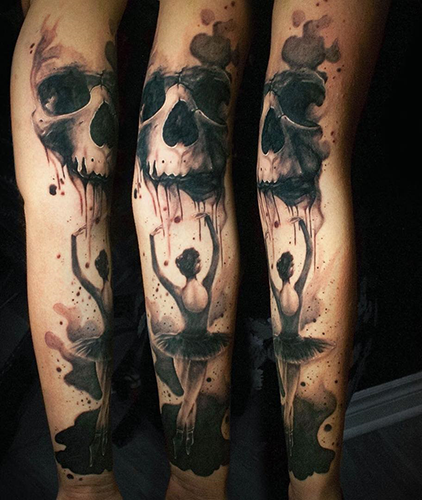 T: Have there been any artists or people who have influenced you?

M: Certainly! I was hugely influenced by the wave of European artists with their graphic style and illustrations that were completely unique from the stuff I was used to seeing before. I was also influenced in the industry by certain artists which I admired greatly. For example, I enjoy the simplicity and impact of the work of Ad Pancho or the chaos and random style of Timur Lysenko! Besides the fact that some artists have inspired me more than others, I’d say that every person that we meet or observe has an influence on us in one way or another!. 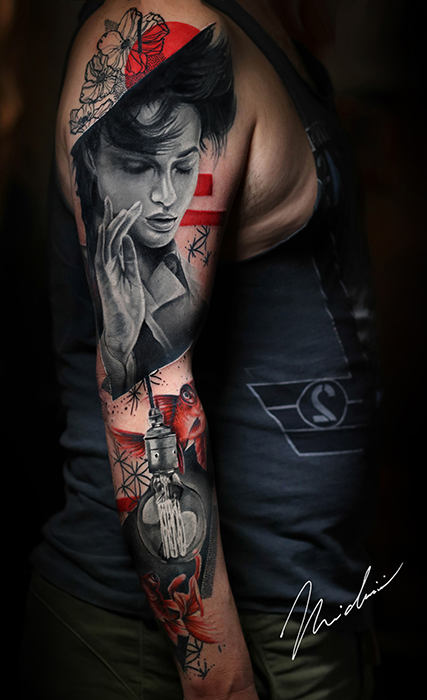 T: What are the steps you take to create your tattoos? What do you do to find inspiration?

M: Sometimes an idea will come to me. Weirdly enough that’s what happened in the famous FishGlobe project series! It consists of always using elements that have no common link to create a metaphor that makes no sense haha!
But, most of the time because I work mainly with realists subjects, I do a lot of image research to find one that inspires me. From there I try to go into my more graphic world to change things with organic and graphic elements.
There are multiple ways to gain inspiration: sketching, watching movies, listening to music, surfing the web on sites like ffffound and pinterest! Once a subject or idea is found, all there’s left is to work to bring it to life! 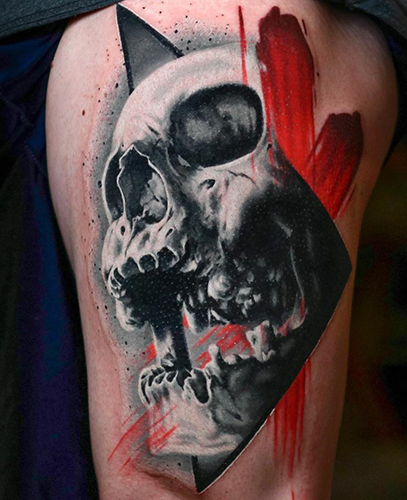 T: What has been your favourite work so far?

M: I think the big eye on the chest that I did a couple of months ago! I’m still hesitating because I love a lot of different pieces for different reasons but I think I’ll choose that one.

T: What has been the highlight of your career? What moments stand out to you?

M: Officially it would have to be when I got my first important sponsorship. After 4 years of hard work every day, to persevere in spite of the ups and the downs, progressing and giving my all to surpass myself I got my first official sponsorship! It’s a moment that gives us a good pat on the back and confirms to us that our efforts are bearing fruit and shows us that we are on the right track! 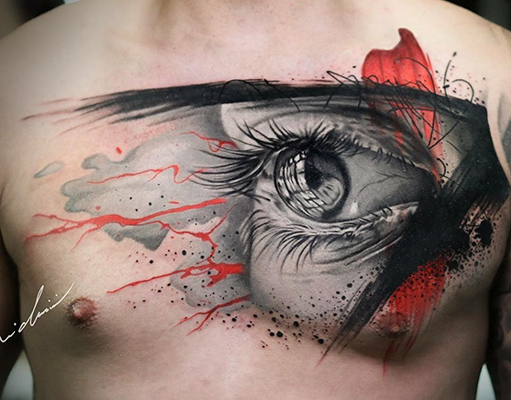 T: You work in the same shop as Luka Lajoie. What’s it like working alongside him? What do you enjoy about working at The Arts Corporation?

M: Hahahaha that sacred Luka right!? In reality, it was him who gave me my official chance 4 years ago when I wanted to really try tattooing and it’s to him that I owe a lot! I couldn’t ask for more from a co-worker. There’s nothing better than to work every day beside someone who’s so passionate about tattoos and who works very hard all while staying so positive! This has been an amazing benefit to my work as it allowed me to adopt the same attitude! In fact, now it’s more like working with a friend than a co-worker. The days are more enjoyable and filled with many debates that still have no end haha! The Arts Corporation is not just a workplace, it’s a family!

T: How do you see yourself evolving in 2017? What do you want to improve for the New Year?

M: I feel like I have officially started my career right now. I feel like the future belongs to me! For 2017, my goal is to grow my knowledge to the best of my abilities in this field as well as to grow my network of artists! I’m counting on going to conventions outside of Canada, meeting the people who I admire and pushing my own work to another level! We can always go further and push our work to another level! And I plan on doing just that! It’ll be a year filled with hard work (if you can call it work!) 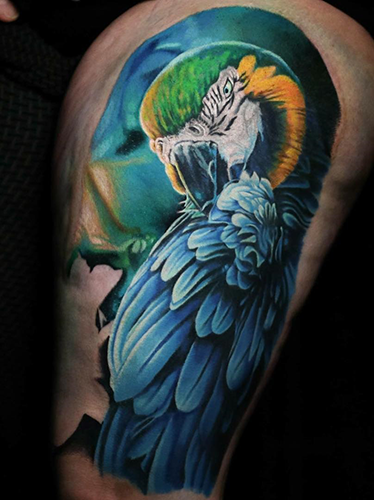 T: If you could ask any question to an artist, what would you ask and to who?

M: I think it would be Timur Lysenko! I’d ask him what’s his secret to creating such seemly random work but that have such a sense of harmony? 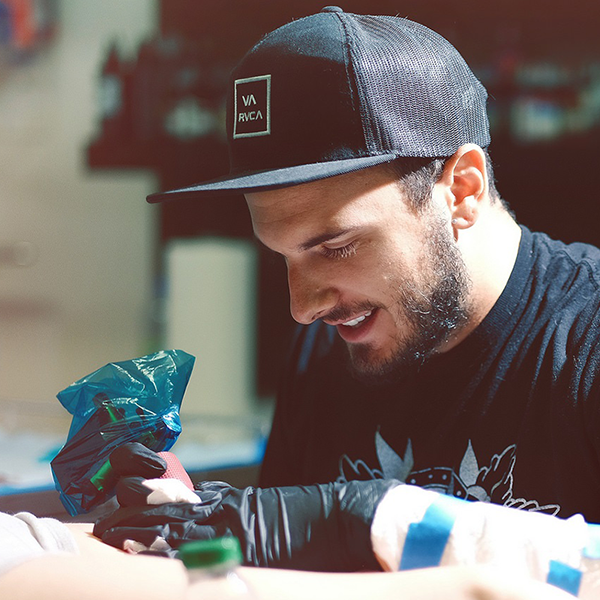 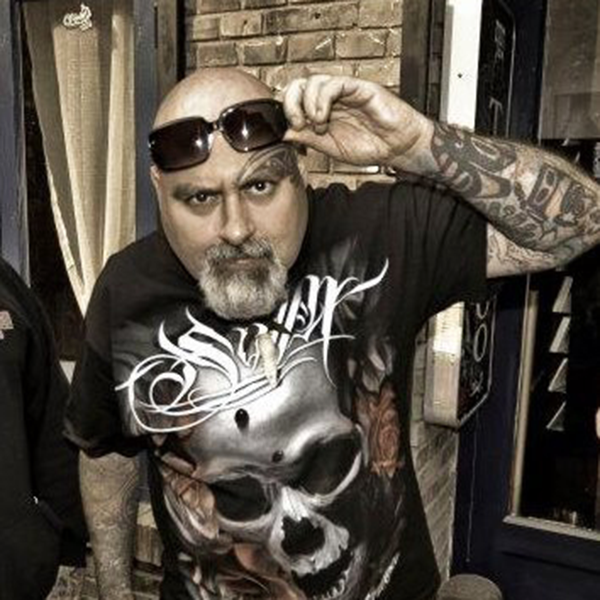 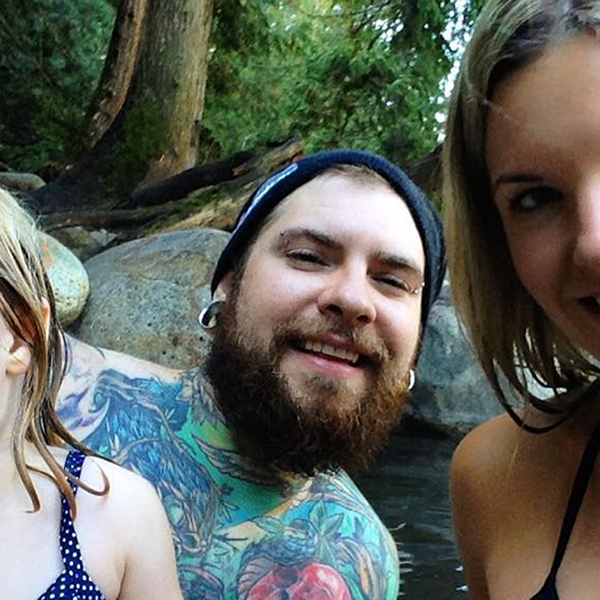 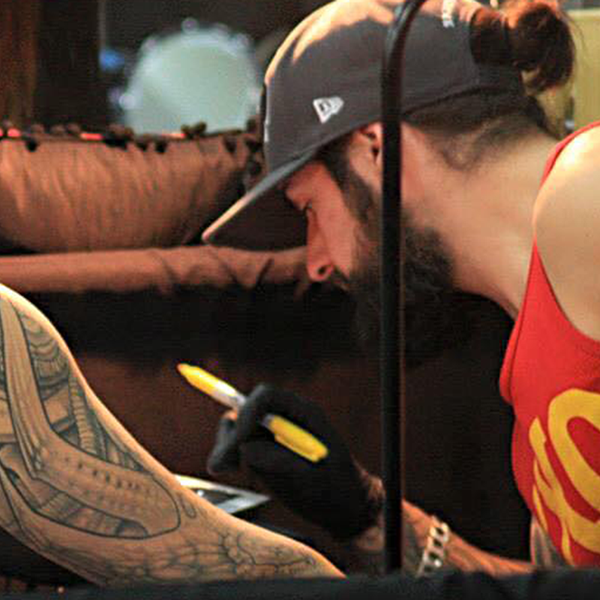